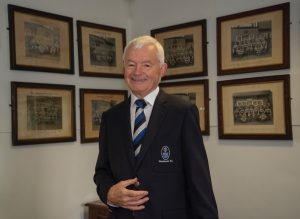 In the 150 years since it was established, Wanderers Football Club has been built and sustained by its community of sporting individuals.  Our club exists today through the consolidation of friendships for life.

As a club we welcome members from across Ireland and countries around the world. Merrion Road is a home for every Wanderer.

Our proud rugby heritage includes 95 Internationals for the Irish, English & Australian Rugby teams,  including 11 British & Irish Lions team members not to mention countless successful club teams over the decades at all levels.

Wanderers was a founding member of the Irish Rugby Football Union in 1874 and ever since has continued to support the Union in the provision of Coaches, Officers and Referees.
During our 150th year we will be hosting many exciting events, chief among which will be 150th anniversary matches versus Dublin University Football Club – Trinity College, bringing together Ireland’s two oldest Rugby Clubs on Saturday 21st September 2019 at Aviva Stadium. Later in the year on Saturday 23rd November, we will hold a 150th Gala Ball in the Clayton Hotel Dublin 4 when we will honour all of our Internationals. Many other events are planned throughout the season to honour those who have contributed to the club over the last century and a half.
During this season we look forward to welcoming all of our fellow rugby club visitors to Merrion Road and Aviva Stadium to recall the good old days as well as to learn what we plan for the next 150 years together!
As President, I would like to thank all of our members and staff for their support both on and off the field. Their commitment and loyalty to volunteering on behalf of Wanderers Football Club makes me proud to be President in this our 150th year. I wish all our young men and women a successful season and encourage them to fully participate in our anniversary celebrations.
Sometimes lest we forget, we are surrounded by a group of very loyal neighbours who have consistently supported our club down through the years. Many a rugby ball may have gone astray but for their consistent helping hand to return to sender.
Finally, on behalf of Wanderers, I would like to thank all of our loyal sponsors for their continued support down through the years.
Here’s to the next 150 years !